Charles Dickens remains one of England’s best loved authors, and his classic stories, such as “Oliver Twist”, “A Christmas Carol”, and “Pickwick Papers” have been regularly turned into plays, films and TV costume dramas.   But how many doll collectors realise that these same wonderful stories gave inspiration to Peggy Nisbet, prompting her to produce some of Dickens’ most memorable characters in miniature?

In 1968, with the blockbuster musical film “Oliver!” taking the country by storm, Peggy was fortunate to secure the rights to produce a set of six dolls, representing the leading characters.   Issued soon after the film’s release, they were P/685 Oliver, P/686 The Artful Dodger, P/687 Fagin, P/688 Bill Sikes, P/689 Nancy, and P/690 Mr Bumble.   The dolls were all from the “Portrait” series, and Peggy’s task was to produce a set of eight inch high dolls that conveyed both the appearance and character of the six stars - We are sure that lovers of this wonderful film will agree that she succeeded in her aim! 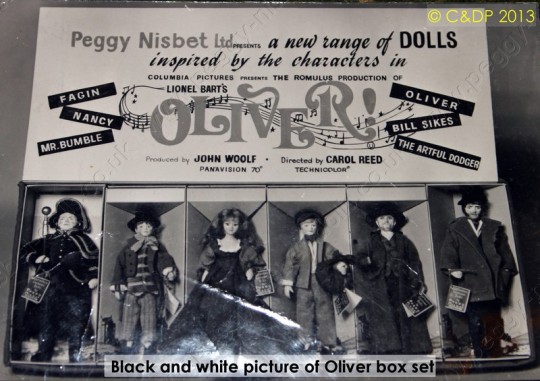 The dolls were sold as a boxed set of six, and due to the success of the film, were very popular.   We have not been able to find out the original selling price for the set, but suspect they would not have been cheap – Peggy Nisbet dolls were renowned for their quality, and the price would surely have reflected this. 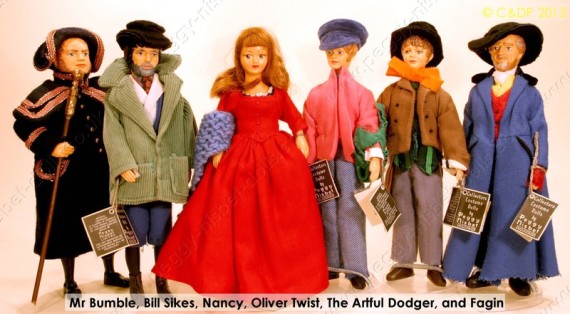 Mark Lester was the child actor who played Oliver, and his wistful faced doll, dressed in a pink jacket and blue cap, is very appealing as the orphan at the mercy of a pack of thieves and scoundrels.   Over his arm, he carries a small bundle, containing all his worldly possessions, wrapped in a knotted green scarf.

His accomplice in crime was The Artful Dodger, very ably portrayed by another childhood star, Jack Wild.   This doll has a cheeky expression painted on his face, which is framed between a battered hat, and an over large collar and cravat.   His brown tail coat, and just-too-short trousers complete the image of this lovable streetwise urchin

Fagin, the leader of the gang of orphans and street urchins he trained as pickpockets, was memorably played by Ron Moody.   Peggy Nisbet’s Fagin is a thin faced bearded individual, with a wide brimmed floppy black hat, and a long blue coat – (doubtless fitted with lots of pockets to fill with ill gotten gains!), with a ragged and tattered bottom hem

The character of Bill Sikes, whose brooding malevolence was so effectively portrayed by Oliver Reed, was another member of the Nisbet cast for “Oliver!”   (Sikes was a former pupil of Fagin’s academy of crime).   His heavy growth of stubble is shown as a grey shadow on the doll’s chin, and his dark eyes look menacingly out from under the brim of his hat.   His green jacket and short knee britches complete his outfit.

Nancy was the mistress of Bill Sikes, and was played in the film by Shani Wallis.   The Nisbet Nancy has luxurious red hair, (like the actress), and wears a full red dress, with a knitted blue shawl over her shoulders.

Mr Bumble was the Beadle of the parish that ran the workhouse where Oliver lived.   He was played to pompous perfection by the much loved Harry Secombe.   Peggy Nisbet’s doll has a face modelled to represent Sir Harry – (Nisbet collectors might also recognise his face as being used later to represent the Prince Regent, Son of King George III).   Mr Bumble’s portly body is also shared with a number of other Nisbet fat men – most notably Henry VIII, and Winston Churchill.   Bumble the Beadle is resplendent in a navy blue coat with brass buttons and gold edged pink piping.   He carries a staff or mace of office, and wears a hat to complete his uniform, and he could, perhaps, be mistaken as a Town Crier, or even a Lord Mayor – If we didn’t know better!

In our humble opinion, there is only one omission from this cast of characters - Bullseye, the ill-treated but ever faithful bull terrier, who followed his master, Bill Sikes, to their deaths on the rooftops of Dickensian London 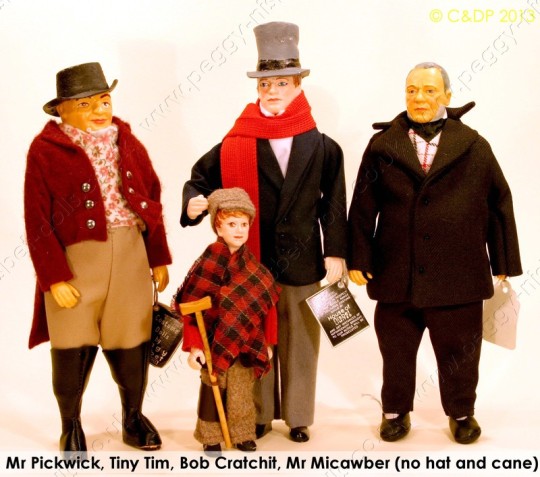 Although the cast of “Oliver!” were perhaps the most memorable of Dickens characters Peggy made, they were not alone in the Nisbet stable.   Introduced in 1978, as part of a range of film stars, was P/759 W. C. Fields, portraying Mr Micawber, from the 1935 production of “David Copperfield”.   This model, another from the “Portrait” range, showed the star wearing a dark suit, with a tall hat on his head, and white spats on his shoes.   He also carried a walking cane, but along with the hat, both these are sadly missing from the model shown in the accompanying picture.

In 1985, three more dolls based on Dickens characters were added to the Nisbet Dickens collection.   B/351 Mr Samuel Pickwick was based on the characterisation made famous by James Hayter, in the 1952 film, “The Pickwick Papers”.   The charming Mr Pickwick doll has a portly figure, and is dressed in tailcoat and boots, his genial smile surmounted by a black hat.

The second doll to be issued was B/358 Tiny Tim, with his father, B/359 Bob Cratchit, the poorly paid clerk to the miser Ebenezer Scrooge, being the third.   This delightful father and son were an instant hit with collectors – The diminutive figure of the crippled Tiny Tim, complete with crutch, oversize cap, and a scarf over his shoulders to keep out the winter’s chill, was full of pathos, while his ever cheerful father was dressed in a long red scarf, and tall hat.

But whatever happened to that miserable miser, Ebenezer?   For years, we were unable to discover if Peggy Nisbet ever made a doll to represent sour old Scrooge – all the researches, records, and archive material we have collected over the years makes no mention of him.   In 2004, a meeting with another Nisbet collector gave us the answer to this intriguing question, which we can now share with you.   There were indeed plans to make not one, but two versions of Scrooge – the first, wearing a nightshirt, to show the miser on his Christmas Eve visitations with the three spirits, and the second, in a suit, to show the reformed Scrooge, as a benevolent and philanthropic man. 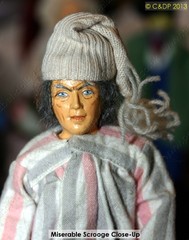 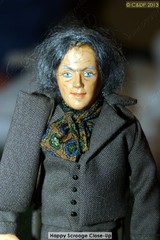 These two “Scrooge” dolls are unique, being prototypes made by Peggy Nisbet and her team, to trial the proposed design(s).   Sadly, these stunning and amusing characters never went into production, and because the collector who owns them has never publicised their existence, they have, until now, remained unknown.   We were privileged to see them, and to be allowed to photograph them, and we hope that you enjoy seeing these special treasures as much as we did!

So there we have the Dickens experience, as seen through the eyes of a Peggy Nisbet collector – but there remains one more Dickens character we have heard about, but never seen.   She is Dolly Varden, A character in Dickens's novel "Barnaby Rudge", described as "a beautiful, lively, and coquettish girl, who wore a cherry-coloured mantle and cherry-coloured ribbons”.   Peggy Nisbet supposedly made two versions of this doll – One was BR/361, and the other was from the “Happy Doll” series – T/126.   We have never seen even so much as a picture of these dolls.   So, were they really made, or did they exist only as prototype models?   Do you have these dolls in your collection? Can you supply the answer to the mystery of Peggy Nisbet’s Dolly Varden?