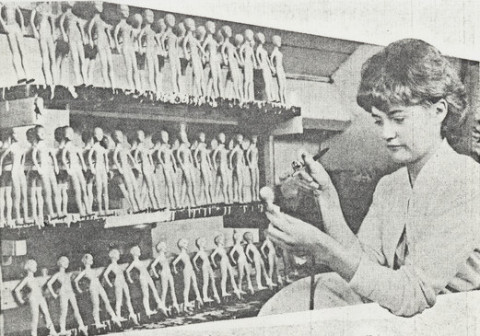 Probably the most daunting aspect of the business, once the dolls became increasingly famous, and demand grew, was the skills and organisation needed to control the manufacturing processes.   At first Peggy and her Aunty Kitty, who was a beautiful needlewoman, produced the prototypes and satisfied orders from her home in Shrubbery Avenue.   Then, with the increasing demand, support was gained from friends and business people.   For some time, Peggy rented a disused water tower from the local council, and this became her first dedicated production facility.   Later on, Peggy was able to buy the tower, and converted it into her family home – the well known “Tower House”, home of the earliest “Tower Walk” dolls.

Peggy decided to turn the business into a limited company, Peggy Nisbet Limited.   The business moved into a factory in Whitecross Road where forty staff were then employed,  plus more than one hundred outworkers.   Everything was now done in the factory, and although Peggy oversaw the production, she still managed to find time to research and produce the prototypes.   All the while, Peggy was ably assisted in every matter concerning the running of the business by a team of dedicated people, including her daughter, Alison, along with Mabel Perry, Malcolm Bowman, and Sylvia Bird, who were to form a strong and dedicated team of many years standing.

Directly the doll bodies were received they had their faces painted.   They were then assembled ready for production runs, normally in units of twelve dolls, which were placed in a small tote bin, together with all the materials and accessories required for the dressing of the doll.   With up to one hundred models in production at any one time - each having to be dressed differently - the diversity of fabrics that had to be sourced, held in stock, selected, and cut into lengths to dress each batch of twelve dolls was mind boggling!

The tote bins, each with the twelve dolls and materials, were then taken to one of the several outworkers for them to clothe the dolls; there was a set weekly routine for this.    The work would be delivered on a certain day, then a week later the finished work would be collected, the outworker paid and a further week's work delivered.   The outworkers, all skilled needlewomen, all lived within a twenty‑five mile radius of Weston‑super‑Mare, and there was a constant delivering and collecting service operated by van.

The dressed dolls, once back at the factory would have to be wigged.   The wigs were glued and tied round the head with string, whilst the glue set ‑ seeing rows of these dolls, seemingly blindfolded, was quite a sight.   The dolls then had their "blindfolds" removed, were finished, inspected and finally boxed, ready for dispatch.   During the 1960s and 1970s over 1,500 dolls were being dispatched every week.

All these processes were running on a large scale, and were very complex.   They required a high degree of experience, organisation and co‑ordination for their successful operation.