We have in our collection a number of "Isle of Wight" dolls made by Peggy Nisbet, but could never find any mention of them in the Nisbet catalogues.   They remained an enigma for many years - all we knew about them was that they were connected to the Lilliput Doll Museum, on the Isle of Wight. 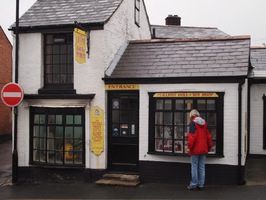 The Lilliput Antique Doll and Toy Museum still flourishes in Brading, on the Isle of Wight.   It houses an internationally acclaimed collection of antique dolls and toys, and its exhibits, (there are over 2000!), cover the period from 2000 BC, to 1950.

We contacted Graham Munday, the current owner of the Lilliput Doll Museum, to see if he could help us in our researches on the history of these dolls - Here is what he was able to tell us :

"Unfortunately, no records of Peggy Nisbet Dolls designed for the Lilliput Museum were kept  from this period.   My mother, who owned the Museum at that time, commissioned a series of Brading and Isle of Wight character dolls, to sell as souvenirs in the museum shop, but she retired in 1989 and now, as she is  nearly 91 years of age, cannot remember any details.   She seems to think that there may have been a young Queen Victoria, and an Isle of Wight Morris Dancer to add to your list, but she isn't sure - (they could have been manufactured by Shallowpool Dolls)."

We also contacted Sue Brewer, author of many books on dolls, (amongst other subjects), and an authority on Shallowpool dolls - here are her comments :

"I believe Shallowpool was making Isle of Wight dolls for the Lilliput museum in the early to mid 1980s.   Perhaps Lilliput asked them, because Nisbet stopped making the dolls.  Most of the Nisbets in your list are different to the Shallowpool ones, though they did make Fanny Wheeler, Sophie Dawes, and, I think, Little Missy.

The dolls listed below were made by Peggy Nisbet for sale by the museum, and they were all based on real local characters.   The one exception was King Charles I, who escaped to the Isle of Wight following his defeat in the first Civil War, where he was imprisoned by the Island's Governor, in Carisbrook Castle.

Queen Victoria's connections with the Isle of Wight are well known, and it is highly likely that in addition to the IoW "Specials", P/701 - Queen Victoria (in a pink dress), may have been sold by the Museum, as this doll depicts the Queen as a young woman

Our researches suggest that these dolls were part of the "Souvenir" range, and that they did not constitute a separate group.   The list below shows the Nisbet dolls that we think were made specifically for the Lilliput Museum, and includes the model numbers, where we have them :

If you can correct any errors or omissions in our listing, or add any model numbers, please do get in touch - we would love to hear from you!

The doll pictures will auto run as a slide show in the window above.

Press F5 (function key 5 on your keyboard), to re-start the slide show.

Alternatively, you may control the slideshow manually – follow the steps below :

Because these dolls are based on historical figures, they all have an interesting story to tell, or a special reason for being included in this family of dolls.   A short biography of each character is summarised below :

King Charles I - Having already been captured once, (as a result of various events in the English Civil War), and imprisoned in Hampton Court, Charles managed to escape in November 1647.   He was advised to go north to Scotland, where he had support, but chose instead to go to the Isle of Wight, to seek the protection of the Governor, Colonel Hammond.   Charles intended to take a ship to France, but Colonel Hammond, torn between his loyalty to the king, and his duty to Parliament, confined the king to Carisbrook Castle.   As we all know, he was later handed over to Cromwell, and executed

Mary Floyd of Carisbrooke - Mary was a laundry maid who carried secret letters to King Charles I from his Royalist supporters, at great danger to herself, when the King sought refuge from Oliver Cromwell, in  Carisbrooke Castle.   Mary’s father was the sergeant of the castle garrison, and although the Islanders were fiercely loyal to the King, he was eventually betrayed, and Carisbrooke Castle was to become his prison.

Frances Trattles - Was the daughter of the innkeeper of “The Rose and Crown” at Newport, IoW, made famous for giving a rose to King Charles I, as he rode by, on his way to Carisbrooke Castle.   The doll is shown holding a rose, in rememberance of this act of kindness and loyalty to the king

Lady Maria Oglander - Was married to Sir William Oglander, and lived in Nunwell House, Brading.   Lady Maria had been, until her marriage, Lady-in-Waiting to Princess Charlotte, (the daughter of the Prince Regent), who had died in childbirth in 1817

Fanny Wheeler - was reputed to assist her father in gathering contraband goods.   Her father was a "Wrecker", who made his living plundering shipwrecks off the coast of the Isle of Wight.

S/510 - Little Jane Squibb - The story of Little Jane Squibb was immortalised in the book, “Annals of the Poor”, by the Reverend Leigh Richmond, who was impressed by her spirituality.   Little Jane was a devout Christian, who lived in poverty in a cottage in Brading.   Stricken with Tuberculosis, she died on the 30th January, 1799, aged just 15 years old.

S/515 - Sophie Dawes as a winkle picker - Sophie was the daughter of a fisherman, (though some say he was a smuggler), and was reared in a workhouse.   In her early life, she would search the beach at low tide, picking winkles, (a small shellfish), from the sand - these were, (and still are), a great favourite with seaside visitors

S/516 - Sophie Dawes - Mistress - Despite her humble beginnings, Sophie rose to become a powerful figure at the French Court.   Her life was eventful, to say the least - She worked in a brothel, and was won in a game of cards by a French Duke, eventually becoming his mistress.   She later married a Baron, and was received at Court by three French Kings.   Once part of the French Court, she lived a colourful life, and was even accused of being involved in the murder of a Prince!   Having inherited a large amount of property in France, she disposed of it, and returned to England, buying an estate near Christchurch, and a house in Hyde Park Square, London.   She died of Angina in 1840, whilst being treated for Dropsy.

S/527 - Little Missy - was the pet name for Charlotte Maria Oglander,  the Daughter of Lady Maria.   It was said that the tragedy of Princess Charlotte’s death so upset Lady Maria that it affected her unborn child, to the extent that the child remained mentally retarded all her life.   Charlotte’s ghost is reputed to wander throughout Nunwell House, weeping.

S/530 - Elizabeth Wallbridge - Elizabeth’s story was told in the book, “The Dairyman’s Daughter”, by the Reverend Leigh Richmond.   According to the Reverend’s book, Miss Wallbridge's life until the age of 26 was of the most worldly character.   Never immoral, she was wilful, proud, selfish, and irreligious.   Her life was, however, transformed by a sermon, and she became very devout.   With exceptional strength of mind, a retentive memory, the mastery of a few religious classics, and enforced leisure because of illness, she devoted her time to the study of the Bible, in which she became remarkably proficient.   Miss Walbridge, after a lingering 18 month illness, died on the 30th May, 1801.   She was 31 years old.   During her illness, the Reverend Richmond often visited her, and had lengthy talks with her.   It was as a result of these discussions that the Reverend was inspired to write the book (The Dairyman's Daughter).

S/531 - Reverend Leigh Richmond, M.A. - Was the Vicar of Brading, and was well known for recording tales of village life (his book, "The Dairyman's Daughter", was inspired by Elizabeth Wallbridge).   He was sometimes referred to as "The Parson"