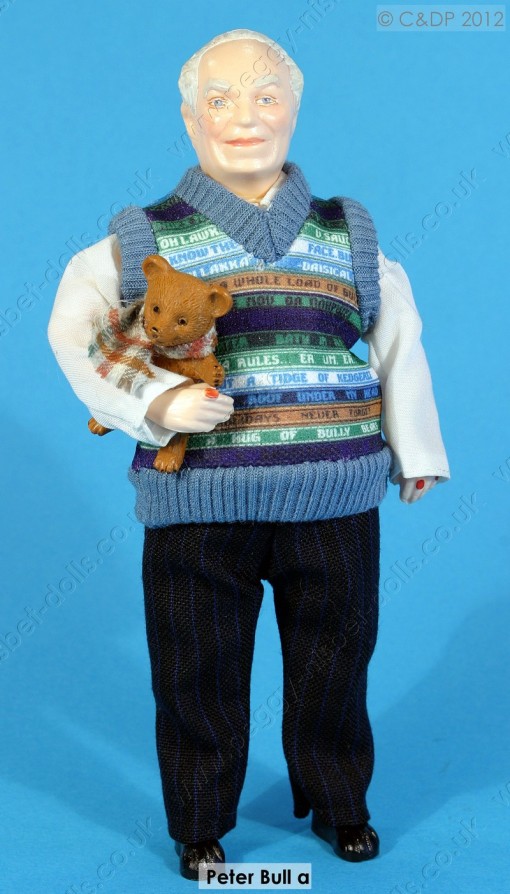 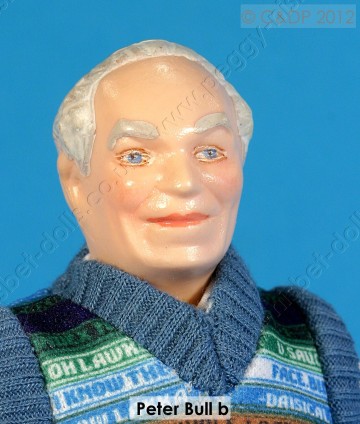 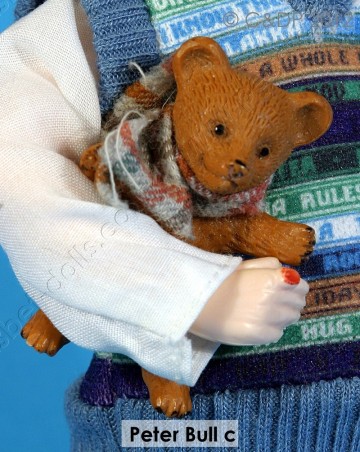 This is the standard production model of this popular doll.   He is wearing a replica of the famous pullover, on which was knitted an anecdotal review of Peter's life.   Under his arm is his famous teddy bear "Delicatessen", (who went on to have his own career as “Aloysius”, starring in the TV Drama “Brideshead Revisited”).  A closer look at this doll will show that, although the head is a portrait sculpture of Peter Bull',  he is based on the "Henry VIII" mould, and has Henry's arms and feet, too

Peter was the Son of Sir William Bull, who served as the MP for South Hammersmith for 30 years..   He made his stage debut in 1933, aged 21, his first film, (The Silent Voice), a year later.   A Broadway bow followed the next year, and his first Hollywood movie role in “Marie Antoinette”, soon after.   It was while making this film that he met his lifelong friend and fellow Briton, Robert Morley.

In films, the corpulent Bull was often cast as unpleasant prosecuting barristers, hard-hearted businessmen or officious government men (including the memorable camera-happy Russian ambassador de Sadasky in “Dr. Strangelove”.   On stage, he enjoyed a wider variety of roles, and at one time ran his own repertory company.    Other notable films he had appeared in included “Beau Brummel”,  “The African Queen”, and “Dr Doolittle”.

His career was put in abeyance for war service, during which he served his country with honour, and  won the Distinguish Service Cross.

Outside of his theatrical work, Bull was well known for his interest in astrology, and even better known for his fascination with teddy bears. He owned perhaps the world's largest and most valuable collection of teddies, and wrote several witty, informative books on the subject.   His interest in Teddy bears led to his forming a close association with the Nisbet factory, and by combining his interests in astrology and bears, he developed the famous “Zodiac Bears” series, for the House of Nisbet.   Peter Bull was the proud owner of the 1907 American Ideal Bear “Delicatessen”, (named for the place Peter found him), who won worldwide acclaim when he starred alongside Jeremy Irons and Anthony Andrews in the television adaptation of Evelyn Waugh's novel Brideshead Revisited.